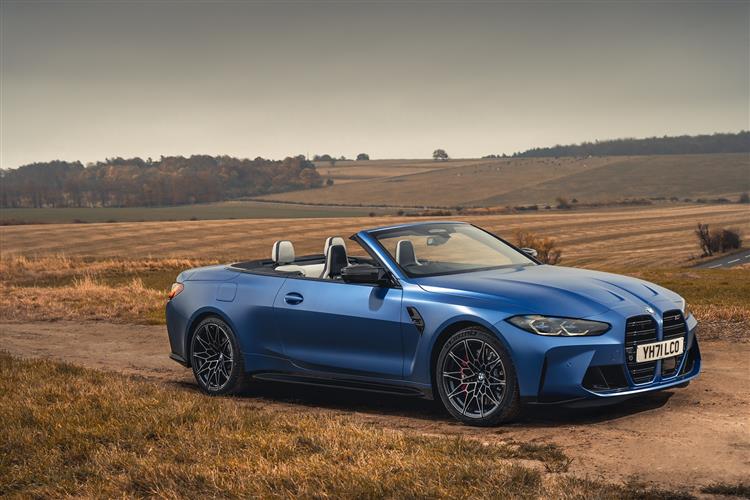 BMW's M4 Competition Convertible might just tempt you out of a supercar, thinks Jonathan Crouch

Supercar-style performance comes in many shapes and forms. Some of them might not even necessarily require a lottery win for ownership. Take this car, the second generation 'G83'-series version of BMW's M4 Competition Convertible. It has a serious need for speed. As before, body style apart, this car remains largely identical to its M4 Competition Coupe stablemate. And, as with that car, quite a lot's changed in the creation of what will almost certainly be the last combustion engine BMW M Convertible model of its kind. Perhaps most significantly, all versions of it will be sold with 4WD. This evolutionary element had to come, the output of this car having spiralled to over 500hp - 510hp to be exact, which is what you get from this 'Competition'-spec variant, the only version of this 'G83'-series M4 Convertible that'll be imported into the UK.

All the key numbers stack up here; there's 510hp from the latest 'S58' version of BMW's classic straight six 3.0-litre powerplant. And 650Nm of thrust, enough to simply hurl you up the road in almost any gear. For this Convertible M4 Competition model, xDrive 4WD is non-negotiable, the set-up being one you can also customise for a rear-driven feel if you want it. The transmission is a ZF 8-speeder and if you're quick with the provided paddleshifters, 62mph from rest will be dispatched in 3.7s. On the way to a top speed that'll be raised to 174mph if you pay the extra for the optional 'M Pro Package'. All of that's accompanied by a glorious roar from the active sports exhaust, whose soundtrack is one of the things you can alter either via this centre console 'Setup' button or the centre stack display's selectable 'M Menu'. Either way, you get to a screen allowing you to tailor your preferred drive settings and store your two most favoured combinations behind these little red 'M1' and 'M2' tabs on the steering wheel - one perhaps for commuting, the other maybe for your favourite backroad. You can alter parameters for engine, transmission and steering; plus there are three 'chassis' options for the suppleness of the Adaptive M suspension with its electronically controlled damping; and two pedal feel settings for the M Compound brakes. Plus there's a centre console 'M Mode' button, which offers 'Road', 'Sport' and 'Track' settings, each of which changes the instrument display and the level of drive assistance system intervention. Braver folks can use the 'M Menu' to deactivate the DSC traction system and play with the track-orientated 'M Drift Analyser'. BMW's standard 'M Drive Professional' package also includes an 'M Laptimer', plus the brand has also redesigned the cooling and oil supply systems specially for circuit use.

This M4 Convertible's neat panel bow soft top roof complements crisp body lines to generate a distinctive, powerful profile. The roof aims to deliver the best of both worlds, fusing the practical benefits of a retractable hardtop with the classic style of a fabric hood. The soft top's electric drive mechanism allows it to be opened or closed, while on the move, at speeds up to 31mph, a process which takes 18 seconds. When driving with the top down, the boot can hold 300-litres of luggage. When it's closed, the variable soft top compartment increases load capacity to 385-litres.With the roof either open or closed, the vehicle's profile accentuates the M-specific design features. The front-end lines of the car converge on the vertical BMW kidney grille and, together with the large apertures to either side, the kidney grille ensures sufficient cooling air is always channelled through to the powertrain and braking. The slim headlights use LED units as standard to generate both low and high beam. Other key design elements include flared wheel arches, M Side Gills integrated into the front side panels and prominently extended side sills that combine with the attachment parts for the front and rear aprons to form a black band around the whole of the car. The black rear diffusor frames the exhaust system's two pairs of tailpipes.

The M4 Competition Convertible xDrive retails at around £82,000, which is around £3,500 more than a fixed-top M4 Competition coupe with xDrive. This top model is set apart from a humbler M440i 'M Performance' 4 Series Convertible variant by Bicolour Black M Double-spoke forged alloy wheels (19-inchers at the front and 20-inchers at the rear), plus a black finish for the rear diffuser, the rear spoiler and the M Sport exhaust system. Signature M details include red accents for the M buttons on the M leather steering wheel and the start/stop button on the centre console. The selector lever with-Drivelogic switch is leather surfaced with an embedded M logo and stitching in M colours. Interior trim strips in Carbon Fibre High-gloss are standard, as is fine-grain Merino black leather trim and M sport seats, which are electrically adjustable and heated. These seats have pronounced side bolsters, integrated head restraints and an illuminated model badge. There's also an M Head-up Display. Drive stuff for this M4 model includes M Steptronic transmission with DRIVELOGIC, an Active M Differential, M Compound brakes and the extra driving modes of the M Drive Professional package. A highlight of the options list is the new M Carbon bucket seats for the driver and front passenger, which include CFRP in their construction and save 9.6kg over the standard M sport seats. These can be specified on their own or within the M Carbon Package.

You won't be expecting a 510hp motorsport-tuned super sports convertible to be inexpensive to run - and of course, this one isn't. The best that BMW could do was to make it class-competitive - or at least class competitive against non-electrified rivals - and they have at least done that. For the M4 Competition Convertible xDrive, the readings are 27.7mpg and up to 231g/km. These kinds of readings are kept in check by BMW EfficientDynamics technology features like electromechanical power steering, Auto Stop-Start, Brake Energy Regeneration and on-demand control of engine ancillary components. But they might still give some browsing buyers cause for concern. Even to get anywhere near the figures we just quoted, you'll need to drive with considerable restraint, with the engine in its 'Efficient' M Menu setting and the centre console 'M Mode' button set in its most sensible 'Road' format. You can monitor just how much high octane fuel you're using via a graphical read-out provided in the centre screen's 'Journey Data' section, part of a 'Driving Information' section that also has an 'Energy flow' graphic. But of course as an M4 owner, that's the last thing you'll want to do. Drive this car in anger as it was meant to be driven and the figures we've given you will of course disappear in a high octane haze. And if you use your right boot in anger a good percentage of the time, you'll certainly chew through consumables like tyres and brake pads. Plus the Michelin Pilot Sport 4S tyres will be fearsomely expensive to replace, so bear that in mind before you go experimenting for too long on track days with the 'M Drift Analyser'.

This might well be the ultimate M4 - but is it the ultimate money-no-object M car? There's a raging debate about that, which includes the ongoing controversy about that divisive front grille - we quite like it: you may not. Beyond that and a few moans about the M Carbon seats (which you don't have to have anyway), there's really not much to fault, provided you can afford both the premium asking price and expensive running costs. Some have tried to suggest that that this 'G83' model's switch of auto transmission from DCT dual-clutch to torque converter ZF has made cog-swapping a touch less sharp. And that the orchestral accompaniment from the 'S58'-series version of this car's 3.0-litre straight six isn't quite as memorable as before. We don't have any issues with either of these things - and we don't think you will either. On the right day, in the right mood on the right part of your favourite backroad, there'll be times in this M4 when you'll wonder whether any sensible sports convertible at any price could be more exciting than this one.