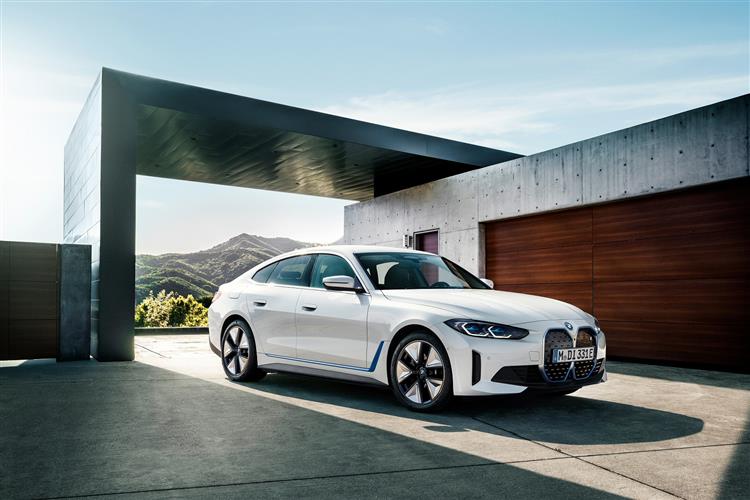 The i4 takes BMW into uncharted territory. Jonathan Crouch takes a look.

The i4 is the most important BMW EV model to date, an electric car at the very heart of the Munich maker's brand. It's a GT-styled sports saloon aimed squarely at the Tesla Model 3 and sized somewhere between 3 and a 5 Series. That rival American model has proved popular with business EV customers, but BMW believes the i4 sets a significantly higher bar in this segment when it comes to drive dynamics and interior quality. The driving range figures are pretty Tesla-like too. And the top i4 performance model, the M50, offers the kind of performance that might make customers think twice about pricier fast EV four-doors like the Porsche Taycan and the Audi e-tron GT quattro. Sounds intriguing.

To begin with, i4 customers choose between two powertrains. The eDrive40 model gets a rear-mounted electric motor putting out 335hp, enough to power the car to 62mph in 5.7s en route to 118mph. The WLTP-rated range is 367 miles. If that's not fast enough, your alternative is the high performance M50 variant, which offers a rear-biased xDrive all-wheel drive system. Here, the rear-mounted electric motor is joined by another on the front axle, creating a total output of 537hp, enough to get the car to 62mph in just 3.9s on the way to 140mph. The driving range figure falls though, to 316 miles. BMW hopes to set a fresh standard for handling in this segment and to that end has stiffened the chassis, given the car sharp, engaging steering and incorporated wider tracks than you get on a 3 Series. Rear air suspension is standard across the range and the M50 adds adaptive M dampers, plus a unique 'Sport Boost' function that can be used to release the drivetrain's maximum output when the car is being driven in 'Sport' mode. Both i4 variants get a Dynamic Stability Control system that works 10 times quicker than a conventional set-up.

Visually, this i4 aims to offer a more sporting take on what a mid-sized EV should be. The dimensions, 4,785mm long, 1,852mm wide and 1,448mm tall, are similar to those of the brand's 3 Series saloon, but there's also a 'Gran Coupe'-style GT look that gives this car a more upmarket demeanour. Unlike the larger iX, there's no EV-specific platform. Instead, under the skin, the i4 uses basically the same CLA modular cluster architecture that features in all of the brand's other mid and large-sized models, though with a super-slim lithium ion battery inserted beneath the floor of the passenger cell. The sleek shape has a drag coefficient of just 0.24Cd, helped by active elements like 10-stage adjustable flaps in the front kidney grille that open and close to aid aerodynamic efficiency. Inside, there's a completely new approach to the company's iDrive cabin screen design. This sees a 12.3-inch digital instrument panel paired to 14.9-inch central infotainment screen, creating what the brand calls a 'Curved Display'. This is held in place by a supporting structure concealed from the occupants' view, so it appears to be standing freely in the cockpit. And the use of anti-reflective glass makes it possible to dispense with the binnacle usually required to shield the readouts from sunlight. Rear seat space is more 5 Series than 3 Series-like. And there's a big 470-litre boot.

Prices start at around £52,000 for the i4 eDrive40 model with base 'Sport' trim; you'll need around £54,500 for the same car with more dynamic-looking 'M Sport' spec. The top i4 M50 flagship model costs around £64,000. Most will want the eDrive40 'M Sport' model, which comes with 18-inch M aerodynamic wheels, BMW's 'Live Cockpit Plus' dual cabin screens and black Alcantara and 'Sensatec' (man made leather) upholstery and trim. It also shares the same M Sport Exterior Styling, M Sport Spoiler and Aluminium Rhombicle Anthracite Trim of the flagship i4 M50. Equipment standard to all versions includes a reversing camera, Parking Assistant, automatic air conditioning, ambient lighting and LED lights front and back. A host of options are also available, enabling customers to personalise their i4 to their own individual requirements. BMW offers around 40 assistance functions for the i4 either as standard or as an option to enhance safety and comfort when driving and parking. For those looking for the ultimate sound experience, there is the Harman Kardon surround sound system, complete with 16 speakers and a digital seven-channel amplifier delivering 464 watts of audio power which is optional on the i4 eDrive40 and standard on the i4 M50.

We'll re-state the range figures we gave you in our 'Driving Experience' section. The i4 eDrive40 delivers a claimed WLTP-rated range of up to 367 miles per charge from its 80.7kWh-plus battery pack. With the i4 M50 model meanwhile, the extra weight of the 4WD system lowers that range figure to 316 miles. In a bid to keep weight down, the Munich maker has optimised driving range by increasing the energy density of the batteries used, rather than increasing their size. Both models have a maximum recharging rate of 200kW, which means the battery can be recharged from 10-80% in as little as 31 minutes. Adaptive and individually regulated recuperation during overrun and braking allows the efficiency of the drive system in the i4 to be increased in a way that no other model in this segment can. Intelligently connected drive management means the intensity of the brake energy recuperation can be adapted to the road situation, as detected by data from the navigation system and the sensors used by the driver assistance systems. Over an ownership period of 125,000 miles, BMW claims that the i4 eDrive40 will have a 45%-lower global warming potential than that of a comparable diesel 3 or 4 Series model. And the brand is seeking to enhance the sustainability of its supply chain and increase its use of recycled materials for the i4. All of which will help to cut production emissions by 18%.

Having dipped its toe into the water of the EV market during the 21st-century's second decade, BMW here has finally got really serious about electric vehicles - high volume production-serious. This i4 won't really sell in the numbers eventually envisaged until lower capacity more affordable batteries are available for it, but that's not too far off. The Munich maker promises that by 2024, it will offer an EV in every one of its big selling segments, so this is just the start of a tidal wave of battery-powered BMW's. What's encouraging is that unlike the i3, the i4 seems to be BMW to the core, from its rear-biased drive system to the style of the panel work and the iDrive-cleverness of the interior. Previously, if you loved BMW's but needed an EV, you really needed to buy something else. Now the Munich maker has your number. And this might well be it.